Every now and then, you find a movie that you just can’t get bored of, even after watching it again and again. A film that you want to watch with people, to let them enjoy it as much as you do. This has been that movie for me for the last two years. Every time some friends have gathered around a TV screen, the answer to “what movie should we watch now?” has always been “hey, do you know Wild Tales?”.

Relatos Salvajes is one of the most prolific collaborations between Spanish and Latin American cinema makers from the last years. Directed and written by Argentinian Damián Szifrón, this film is a collection of six crazy stories, six wild tales that are completely separate and explore the pleasure of letting go and losing control. Let’s check them out, one tale at a time.

The movie has a strong, shocking beginning, that turns a completely ordinary situation, a flight, into a surprisingly violent situation. I know that description lacks details, but ruining the secrets to you would be unforgivable. This first segment is a proof of how beautifully directed the whole film will be. The simple yet sharp dialogues work brilliantly, as they keep the story moving forward by themselves. The sense of mystery is absolute during the runtime of this short pre-credit piece, and with an epic conclusion, it serves as a great kick-off for the movie. The shortest, yet my second favourite segment of the movie.

The darkest tale of them all, without a doubt. It depicts how a young waitress reacts when a politician, who, besides being known for his unlawful businesses, was the responsible for her father’s death, enters the pull-up in which she works. Ethics and the will for revenge get twisted as the cook, an old lady beautifully portrayed by Rita Cortese, shares her willingness to help in a murder plan. The cinematography plays an essential part during this section, as the conversations have more to them than just words thanks to a beautifully delivered camera work. The humour is very strong (and dark) in the entire movie, and some of the comedy bits in this part are very memorable, indeed. A segment that I’d personally make a couple of shots shorter, but is incredibly satisfying anyways.

Two drivers get engaged in a brutal, savage fight over a stupid argument as the situation heats up slowly yet unstoppably. The bloodiest, most disgusting segment of the movie gets me on the edge of my seat every single time. Unfortunately, a few stupid decisions made by the main character make the tale less believable, and got many friends of mine shouting at the screen last night. “Why the hell are you doing that!?”

Before praising the amazing performance from Ricardo Darín, a mention to the music composer for this movie, Gustavo Santaolalla (who also wrote The Last of Us’ soundtrack, one of the best music for a videogame ever) is due. His pieces of music work beautifully throughout the entire film, but especially in this segment. Every note blends incredibly with the situations and environments, and helps the narrative quite a lot. Simply awesome. Back to Darín. His portrayal of an explosive-expert engineer that gets pissed off over and over again due to parking fines (among other reasons), until reaching his highest point is wonderful to watch. His life crumbles in front of his eyes and watching how he deals with it is stunning. Once again, beautifully directed, with a clever cinematography and sharply edited.

Follows the more slow-paced rhythm the previous segment set and serves as a more relaxing piece after all the craziness of previous episodes, as it is almost 100% conversation based. Therefore, the script plays a huge part in this piece, which seems to be the most carefully written of them all. Sharp dialogue is properly delivered as the characters have to make an arrangement to get the housekeeper of a wealthy family declare himself guilty of the hit-and-run accident their teenage son is responsible for. The dealing quickly shows its darker side, as an ever-developing chain of corruption begins from the very first minute. It is a different tale from the rest, as it features no violence (well, almost). It is a very interesting piece, that serves the movie well because of its different pacing, but I wouldn’t call it a highlight.

The big finale. The best of the best. A wedding goes terribly wrong in every possible way and it turns into a spectacular chain of unpredictable events, when the bride discovers the man she just married has been cheating on her – with one of the guests. Erica Rivas plays the bride, and her performance could be the best of the entire film. Her character develops from likeable to revengeful, from hopeless to psychotic, in just a few minutes, and every single line, every single look is delivered perfectly. The chemistry between characters is also splendid, and even if the events are crazy, they are perfectly understandable as the all relationships are impeccably portrayed. The most heartfelt, unpredictable, beautiful and satisfying segment of them all, it would make Quentin Tarantino proud. 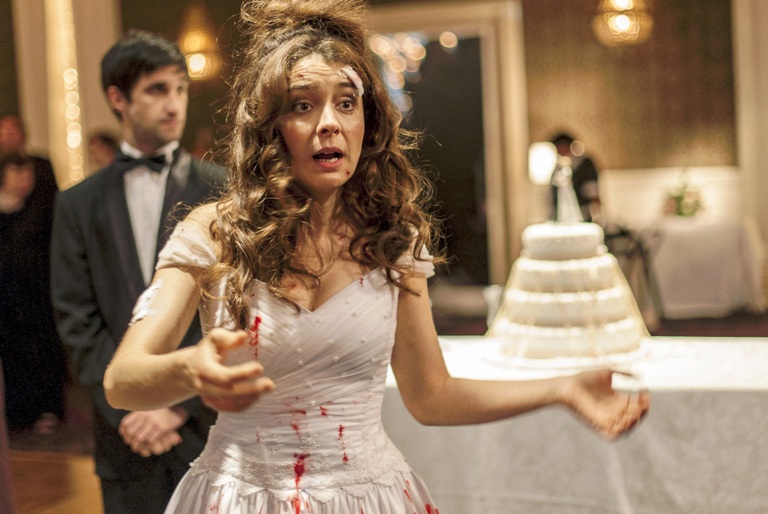 No wonder why Wild Tales got nominated for best Foreign Language Film in the 2015 Academy Awards. This is an incredible movie, both easy to watch and enjoy, yet thought provoking enough to get stuck in your head for a while. It blends great script, a beautiful use of violence, and greatly portrayed characters. All the stories feature common frustrating moments that the audience’s investment in the characters is immediate, and they all evolve so satisfyingly, it makes every member of the audience smile with each twist. A joyful experience from the first minute to the last, and one that makes me hope Szifrón will continue surprising us with more fresh, original and wild films. 9/10